Guest Post: A Love Song for the Sad Man in the White Coat by Roe Horvat

I’d like to welcome Roe Horvat to my blog today with the low down on his new release, A Love Song for the Sad Man in the White Coat. 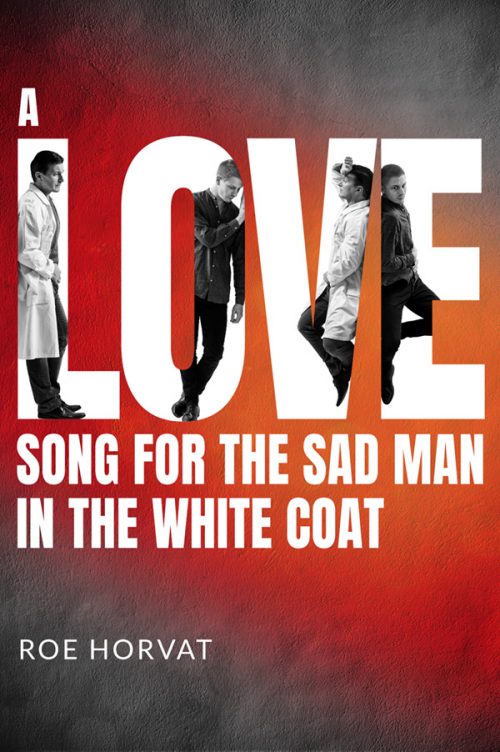 Blurb
Simon had always expected love to feel different than this. Whether it was his Catholic upbringing or the poetry he’d read—Simon had thought that true love would be uplifting, fulfilling, that it would give a meaning to his loitering, and add joy to his leisure. But not this kind of love. This love was a flesh-eating monster, sharp-clawed and evil-eyed, ravishing his mind with medieval cruelty.
Dr Simon Mráz is a respected specialist and lecturer at the Charles University in Prague. He is a serious man, responsible. His students call him The Cruel Doctor Frost not because he’s unkind, but because of his unwavering, ice-cold composure. As a psychiatrist, he values sanity. And sanity can be found in work, restraint, and self-control.
Not many know of that one time in the past when The Cruel Doctor Frost lost his cool. His ill-advised, secret affair with a student left Simon deeply wounded. Since that day, every minute of Simon’s life has been a struggle to remain sane, functioning. He’s managed so far—as long as he is needed, as long as his work makes a difference, Simon can scrape together enough strength to get up in the morning and run off the nightmares. But when his friends begin drifting away, his beloved protégé becomes independent, and the man who bereaved Simon of his precious sanity might return… Simon’s mind and body stop responding to his impressive willpower.
Links
Amazon: http://a.co/5cUObiV
Publisher: http://www.beatentrackpublishing.com/?n1=publications&id=287
Goodreads: https://www.goodreads.com/book/show/36697128-a-love-song-for-the-sad-man-in-the-white-coat
Author Bio:
Roe was born in former Czechoslovakia and endured a miserable adolescence in the post-communist wasteland. Equipped with a dark sense of sarcasm, they left for Germany and later, Spain.
Finally, they settled in Sweden, where the weather is nasty but the freedom great. Roe works as a motion graphics artist, loves Jane Austen, Douglas Adams and everything in between, preferably by the fireplace with a strawberry daiquiri in hand. Roe writes contemporary romantic fiction – it conveniently balances out their real-life pragmatism.
When not hiding in the studio doing graphics, Roe can be found trolling cafés in Gothenburg, writing, and people-watching.

Excerpt
Matěj stared at the text message from Tina for two useless seconds before it sank in. He stuffed the phone into his jeans pocket and fidgeted, looking through the graffiti-covered window on the never-ending line of vehicles. The tail lights colored the drizzle toward a murky, horror-movie red. It was too early for the sun to be up yet, and when the time came, it would not be strong enough to penetrate the gray cover of the clouds above Prague. In the winter rain, Matěj didn’t see the busy street, the cars and buses, all those people fighting each other with black umbrellas. What he saw was a giant knot of earthworms in a pile of mud. The whole city looked squishy, dirty, writhing while drowning.
The tramway moved again, and Matěj’s whole body jerked backward. At the last second, he caught the pole running along the ceiling and kept himself upright. Swaying in sync with the tram’s motion, he held on until the door finally opened and squeezed his slender body out into the throng of huddled figures on the traffic island. He began running at full speed—as fast as the crowds allowed him—his messenger bag banging around his hip.
Dr. Simon Mráz, or The Cruel Doctor Frost, as the whole student body called him, was overseeing the exam in Internal Medicine today. It was unexpected yet not impossible. If one of the professors was too busy or too self-important to be present for finals, a younger Faculty member would be assigned the tedious task. Dr. Simon Mráz was one of the youngest, therefore most abused assets. His specialty was psychiatry, and he had led two introductory seminars on the topic during the last semester.
In his five years of study, it was the only course where Matěj had a one hundred percent attendance score, and it was not psychiatry that had his full attention during those seminars. In fact, he could barely remember a thing, except for the outline of Dr. Mráz’s lean back under his white coat, his almost invisible smile, and those defined, large, capable hands…
Matěj could not be late. As he ran, his idle brain teased him with imprudent ideas—indecent, delicious ideas. The aloof and brilliant Dr. Mráz had been on Matěj’s mind for some time; today’s exam was an opportunity that would not repeat itself in the foreseeable future.
Matěj jumped over a dog’s leash and continued his mad dash toward the campus building complex, noisily entering the building’s heavy antique double doors with two minutes to go. He almost passed the downstairs cafeteria but changed his mind and approached the counter without acknowledging the line of co-eds. He had the kind of reputation that, on occasion, allowed him to cut in front of the line.
“Hey, lovely! Give me a black one, I beg you,” he said breathlessly but assertively and threw a tenner on the counter. The coin twirled and stilled. The girl behind the counter blushed and hurried to the espresso machine immediately.
Matěj winked at the stunned geeky youngster who was first in line. “Sorry, emergency. Finals in Intern Med, like, right now.” Matěj grinned. The student nodded mutely, his mouth snapping shut.
Matěj Chrs was well known among the other medics. Those who did not know him gave him the leeway regardless. He was visible everywhere with his tattoos, ear gauges, red shoes, and tight clothes, all of which were considered outrageous by the Faculty staff.
Taking the mug and leaving the girl with a flirtatious smile, Matěj took off through the corridor. It was exactly 7:30; the exam was starting right at that moment. Nevertheless, Matěj stopped in front of a bulletin board. Suddenly inspired, he deposited the paper coffee mug on the tiled floor, stole a beige Post-it from the board and tore away a small clean sticky piece. He dug out his pen and tapped it against his lips; he had no time for a limerick. The note had to be short, witty, and to the point.
He smiled as he wrote a single sentence and added his phone number underneath. It was over the top and beyond. There was no way it could work, but he was more than willing to take the risk because if it did work, it would be…glorious.
Folding the note carefully, he used the torn Post-it as tape to attach it to the coffee cup. With the message prepared, he strolled casually to the lecture hall and pushed open the wooden door. He was still smiling when, four minutes late, he entered his exam.
The note he’d taped to the mug said:
Are you wondering the same things as I am?