Jay invited me to stop by the blog and share some of my experiences with self-publishing. Thanks, Jay, for hosting me here today!
First, a little background: I began publishing stories in 2010. I’d rekindled my love of writing after discovering online fanfiction archives, and after a million words of fanfic, finally got up the nerve to submit a story to a publisher. To my astonishment, it was accepted! And so was the next one, and the next one…
I didn’t give self-publishing much thought then. E-readers were not yet the rage, and self-publishing was not only not as easy then, there was a huge stigma against it. And to be frank, I was well aware none of the Big Six Publishing houses would touch my stuff. I was only published because I write in a niche market and I had a genre publisher that knew the ropes.
Back in 2013, I decided to try my hand at self-publishing. I’d written an award-winning story (I still think it’s my best work), and I thought I had a big enough fan base to make it worth trying. Well, the ONLY thing I did right was pay for a top-notch cover. Everything else was a comedy of errors. I mistakenly thought that I could edit it myself. I accidentally uploaded the wrong file to Amazon (and didn’t realize it until someone kindly pointed out all the horrific errors in it). It took me—with the help of my computer-geek boyfriend—over nine hours to format and upload it to various sites. I priced it too high for the ‘Amazon’ market—basing my decision on comparisons to stories I’d released through publishers. I refused to place it in KDP select or Kindle Unlimited, believing a wider platform was better. In short, it became the book with the best reviews no one was reading. Eventually, I pulled it and submitted it to a publisher, who fixed all my mistakes. But I’d missed the Golden Window of sales opportunities, and readers had moved on.
Given I have an incredibly demanding job that occupies me for 50-60 hours a week, self-publishing seemed not to be a good fit for me. Most days, I still believe this. I don’t write as fast as I’d like. There are too many aspect of publishing I need to farm out to other services—thus cutting into my profit margin. Much better for me to spend what little free time I have writing and letting my publisher to the heavy lifting.
But I recently wrote a story that, for contractual reasons, I couldn’t offer to my usual publisher. I resigned myself to the fact I’d have to self-publish it, thinking it was probably good to keep my hand in, right? But this time I approached it differently. Not only did I pay for an outstanding cover, but I had it professionally editing and formatted, too. I talked to people and found out the pros and cons of Kindle Unlimited, and what the best price points were for e-books. I set up a review tour in advance and sent out ARCs. After going round and round about whether or not to enroll it in KU, I finally decided to give it a try. I wasn’t banking my entire writing future on it. It was just an experiment.
I have mixed feelings about putting all my writing eggs in the Amazon basket. As I’ve said before, it feels a little like feeding the local virgin to the dragon in the hopes it will spare your village for another year. And I don’t have hard numbers as yet to say how my sales ranks will translate into royalties. But I can say that within 24 hours of releasing Fool’s Gold, it broke the top 100 in its genre, and that has never happened to me before. And at the time of writing this post, it is still in the top 125, which is also mind-boggling to me.
I can see a day in which I might wind up doing more self-publishing. Because it’s gotten easier. Because there are more freelance services available to help you produce a polished product. Because I get enormous input into the cover, and because I can set the price. Because I can decide to enroll it in exclusive programs and pull it from those programs to distribute it more widely when I choose. But also because when I self-publish, I’m the publisher’s biggest client. I can publish on my schedule, putting books out on the market faster than when I’m standing in a long queue.
Don’t get me wrong. I love my publisher and plan to keep working with them. But it’s nice to know I have options when I need to fill in the gaps between the release of other books.
Fool’s Gold by Sarah Madison—now available on Amazon and Kindle Unlimited. Also available in paperback. 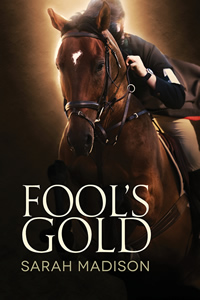 Blurb: Eight years ago, Jake Stanford had it all: a spot on the U.S. Olympic Equestrian Team and the love of his life, Rich Evans. A tragic accident wipes out everything in the blink of an eye. Hard work and sacrifice get him another shot at Olympic Gold, but only if he puts his past behind him and agrees to work with Rich again.
Bound by secrets he cannot share, Rich was forced to give up Jake eight years ago. Now he has a second chance to help Jake realize his dreams. But the secrets that drove them apart haven’t changed, and Rich must face them or risk losing Jake forever.
Bio: Sarah Madison is a writer with a little dog, a large dog, an even bigger horse, too many cats, and a very patient boyfriend. An amateur photographer and a former competitor in the horse sport known as eventing, when she’s not out hiking with the dogs or down at the stables, she’s at the laptop working on her next story. When she’s in the middle of a chapter, she relies on the smoke detector to tell her dinner is ready. She writes because it’s cheaper than therapy.
Sarah Madison was a finalist in the 2013 and 2015 Rainbow Awards. The Boys of Summer won Best M/M Romance in the 2013 PRG Reviewer’s Choice Awards. The Sixth Sense series was voted 2nd place in the 2014 PRG Reviewer’s Choice Awards for Best M/M Mystery series, and 3rd place in the 2105 PGR Reviewer’s Choice Awards for Best M/M Paranormal/Urban Fantasy series.
If you want to make her day, e-mail her and tell you how much you like her stories.
Website: http://www.sarahmadisonfiction.com/
Twitter: https://twitter.com/SarahMadisonFic
Facebook Fan Page: http://www.facebook.com/#!/pages/Sarah-Madison-Author/106445646104338
E-mail: akasarahmadison@gmail.com
If you’d like a chance to win one of the stories from my backlist, please leave a comment here (with your email). I’ll select someone at random for one of my e-books.