Volatile by Avylinn Winter: Out at Pride Publishing now

I’d like to welcome debut author Avylinn Winter to my blog today to tell your about her new release, Volatile. Welcome Avylinn, and congratulations on your release 🙂

Volatile
Pre Release from Pride Publishing 26th of July
General Release 23rd of August
Volatile began in one of the many metro stations in Stockholm. The hairs on my arms stood on end, and I smiled at the hauntingly beautiful sound of a violin. The guy playing was talented and swayed to the music pouring out with an echo inside the tomb-like station. I sat down on one of the benches and let my head spin with ideas. It’s not that often that I feel that rare, pure spark of inspiration. It hit me like a freight train and wouldn’t let me go until I had finished the story. It turned out to be sweet, angsty, terribly cheesy at times, and the first novel I felt proud of when I typed the last word.
Volatile expanded into a set of three stories, and became the start of the Treacherous Chemistry series. The other titles are still works in progress, but each novel is stand-alone, so there is no need to fear cliffhangers, and absolutely no need to wait for the other novels. I promise. 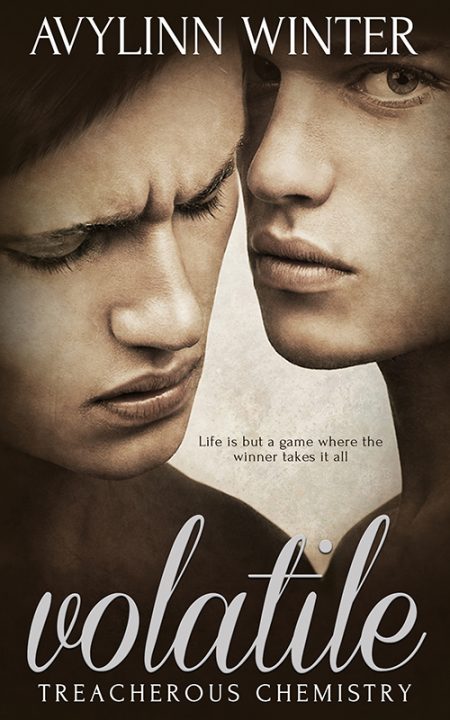 Blurb
Like a depressed moth drawn to a wild flame, Chris hoped that flame would brighten his life, not burn him alive.
Chris Sinclair fades into a gray world after losing his mother to cancer. When forced to attend a concert, as a last attempt to coax him out of his shell, he discovers that life might not be as bleak as he first thought.
Dante Heron holds the audience between the tips of his fingers and the delicate bow, playing the violin as if every heart is his to command. However, something darker brews behind the façade, and Chris is determined to solve the enigma.
When Chris is offered the job of traveling around Europe with the famous violinist, he surprises himself by accepting. With no idea of what awaits him, he’s thrown into a world where emotions rule and rules are bent.
They’re a perfectly dysfunctional match, but then there’s always calm at the heart of the storm.

Excerpt:
The well-dressed crowd parted before Ms. Demalier in an unsettling manner. I felt their curious stares dig into my back as she dragged me toward a table with hundreds of crystal glasses. “Wolves,” she’d said. They didn’t look very wolfish to me. Rather, they reminded me of cats with their self-satisfied smirks and ill-disguised vanity.
“First, champagne.” She swept up two glasses with careful grace and gave me one of them. I studied the small bubbles as they rose through the wine, not quite sure what to make of it. Ms. Demalier must have noticed my odd stare because she let out a soft laughter. “Don’t worry, you’ll like it. It’s impossible not to enjoy this one.” She pointed at a dark green bottle, and I guessed I should have recognized the brand—it was implied that I should—but I wasn’t that kind of guy. I drank beer and the occasional glass of Jack Daniel’s, but certainly not wine of the sparkling kind. Besides, I wasn’t old enough to drink, but she didn’t need to know that little detail.
“Ah, there he is.” Ms. Demalier pointed at someone behind me, and I almost choked on the dry wine. It was the violinist who’d held me entranced throughout his solo. He appeared much the same as he had on stage, but without that entrancing energy. “Dante, come and greet my new friend, Chris.”
No, his eyes weren’t wild anymore—they appeared completely dead as they stared at nothing. He didn’t smile, and he didn’t offer his hand.
“Dante, get over it. The performance was flawless, and here’s someone who probably wants to discuss something that has nothing to do with music.” Ms. Demalier nudged me forward as if to physically attach us to one another.
Dante’s eyes narrowed, but as his gaze shifted to me I saw how his expression transformed into something very different. He appraised me from head to toe with an amused smirk dancing on his lips. Annoyed, I did the same to spite him. He appeared exotic with those pale green eyes paired with his dark, unruly tresses, but the contradiction suited him. His nose would probably have been the most prominent part of any other face, slightly crooked and thin, but his eyes stole all the attention. Girls would swoon, that much was clear.
“Chris, was it?” Dante’s voice was smooth as silk and held a deep timbre that fit well with the rest of him. I shivered just as I’d done when he’d played, and the feeling intensified when his lips curled into a grin.

Links:
Buy now at Pride Publishing:
https://www.pride-publishing.com/book/volatile
This book will be available at other retailers on 23rd August
https://www.goodreads.com/book/show/30827868-volatile

Author Bio
Raised in one of the cold corners of the world, Avylinn spends her days either wrapped up in a blanket or basking in the precious sunlight. When she can’t choose herself, she’s holed up in an office working with climate research that has little to do with the worlds and characters she creates in her vivid dreams.
Always the emotional one, she has found her outlet in writing, voicing thoughts, emotions and fears through her characters that feel very much alive to her. And, what began as a hobby soon took more and more time in her life until she realized that she had left her old life behind and entered a new one where her emotions turned into a super power—ready to launch at her poor readers.
She recharges with the help of coffee, cinnamon buns, popcorn and occasionally a healthier alternative.