Hi, Lillian Francis here, and I’ve popped in to show off my amazing cover for my novel, New Lease of Life, coming soon from Dreamspinner Press.
But first the Blurb.
Phillip used to laugh a lot, back when his friends called him Pip. However the good deed that left him hospitalized not only marred his body, it stripped him of his good humor too. Ever since, he has pushed his friends away and shut out the world. Donating his vintage clothing to a charity shop should have been the final act in a year-long campaign to sever the links with the man Pip used to be, but the stranger on his doorstep awakens feelings in Pip that he hasn’t experienced since the incident that left him angry at the world and reliant on the cold metal of the hideous hospital-issue crutch.
Colby forces his way into Pip’s life, picking at the scab of his past. Colby isn’t interested in Pip’s money or his expensive address. He has only one goal: to make Pip smile again. With every moment in Pip’s presence, Colby chips away at the walls Pip has built around himself. Pip knows it’s impossible to fight his attraction with Colby’s sunny disposition casting light into the darkness in his soul.
Drum roll please.
Presenting
Cover art by Paul Richmond. 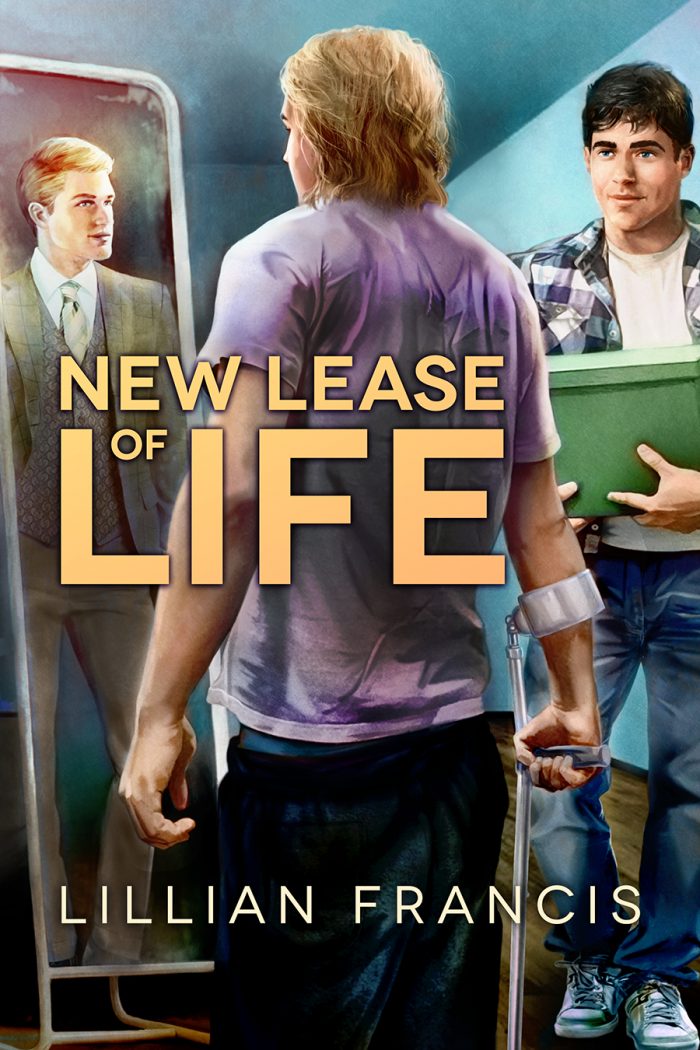 It’s smashing, isn’t it, and fits both the story and my vision for the cover to perfection.
New Lease of Life is now appearing on the Coming Soon page at Dreamspinner Press and is already available to pre-order. If you are quick you may be able to pick it up in the current 35% off sale.
Or appearing on my author pages at
Amazon US
Amazon UK
AllRomance
Now the boring bit…
About the Author
Lillian Francis. Author of gay romance. Happy Endings guaranteed. Eventually.
Lillian Francis is an English writer who likes to dabble in many genres but always seems to return to the here and now.
Her name may imply a grand dame in pink chiffon and lace, but Lillian is more at home in jeans, Converse, and the sort of T-shirts that often need explaining to the populous at large but will get a fist bump at Comic-Con. Lillian is a self-confessed geek who likes nothing more than settling down with a comic or a good book, except maybe writing. Given a notepad, pen, her Kindle, and an infinite supply of chocolate Hob Nobs and she can lose herself for weeks. Romance was never her reading matter of choice, so it came as a great surprise to all concerned, including herself, to discover a romance was exactly what she’d written, and not the rollicking spy adventure or cozy murder mystery she always assumed she’d write. Luckily there is always room for romance no matter what plot bunny chooses to bite her, so never say never to either of those stories appearing.
Lillian lives in an imposing castle on a windswept desolate moor or in an elaborate shack on the edge of a beach somewhere, depending on her mood. And while she’d love for the heroes of her stories to either be chained up in the dungeon or wandering the shack serving drinks in nothing but skimpy barista aprons more often than not they are doing something far less erotic like running charity shops and shoveling elephant shit.
Drawn to the ocean, although not in a Reginald Perrin sort of way, she would love to own a camper van and to live by the sea.
Find her at
Blog: lillianfrancis.blogspot.co.uk
Facebook: www.facebook.com/lillian.francis.100
Twitter: @LillianFrancis_
Goodreads: www.goodreads.com/Lillian_Francis