Today I’d like to welcome one of my good friends, and favourite authors to my blog. Annabelle writes m/m books in many subgenres. If you haven’t read anything of hers yet, there is something in her backlist for everyone, from fantasy and dragons, to wolf shifters, to contemporary romance. Her latest story, Magic & Mistletoe, is a lovely contemporary holiday romance with just a hint of magic to spice things up. It reads like a Hollywood rom com and a lot of fun.
Magic & Mistletoe will be out on Nov 30th, in the meantime you can pre-order it (links below), and scroll down for the chance to win an advance copy in the giveaway here. 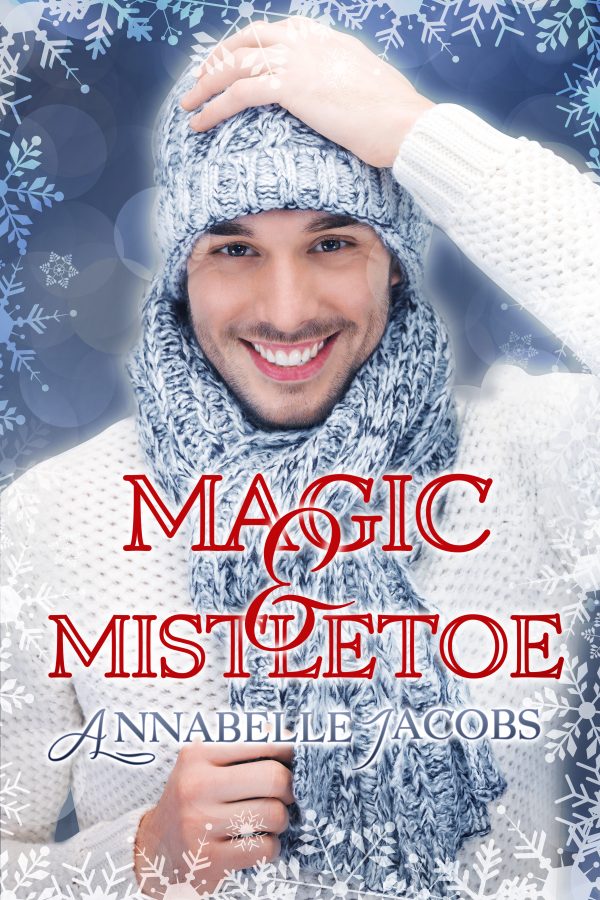 Christmas is Harry’s favourite time of the year, but it looks like he’ll be spending it alone. When it comes to the men he fancies, his luck is non-existent. Harry’s nerves always get the better of him—especially when he tries to talk to Andrew, the hot guy downstairs.
Everything changes when Harry meets a mysterious girl in the woods who professes to be a witch. He dismisses her claims, but when odd things start happening to him, he has to reconsider.
Andrew was attracted to Harry from the start, but their awkward encounters put him off. All goes well until Harry opens his mouth—and ruins it with his stupidity and silly comments. When Harry suddenly becomes more relaxed and they have a proper conversation, Andrew realises his first impression was wrong. As the days count down to December 25, they get swept up in the Christmas spirit and their relationship moves faster than either expected.
A little winter magic might have been the push they needed, but Harry worries that when it wears off, he’ll no longer be the man Andrew wants.
Buy links
Amazon US
Amazon UK
Universal link
Excerpt
Harry didn’t need to look behind him to have his suspicions confirmed. The smug expression on Jason’s face said it all. “I hate you,” he whispered.
Jason kicked his shin. “Sit up, smile, and look happy to see him.”
Two minutes later, Andrew was pulling up a chair and setting his drink on the table.
Harry looked at the red takeaway cup topped with a mountain of whipped cream, and grinned. Instead of blurting out the first thing that came to mind—“Are you really gonna drink that?”—because God only knew what would happen this time to make him stop, Harry paused and took a sip of his coffee.
Andrew darted a glance between Harry and Jason, beginning to look uncomfortable, as though he thought he’d interrupted them.
Harry took a deep breath, then gestured at Andrew’s cup. “Is that one of the Christmas specials?” That wasn’t so hard, was it?
He relaxed a little as Andrew smiled at him and settled back in his chair.
“Yeah, it’s the gingerbread latte. I don’t normally indulge, but it’s bloody freezing out there today, and I fancied something delicious and bad for me.” His gaze caught Harry’s and lingered.
A flare of warmth filled Harry’s chest. This was flirting, right? It wasn’t his imagination.
Then Jason opened his big mouth and ruined the moment, saying, “Yeah, I think Kyle has that effect on a lot of people.”
Harry choked on his mouthful of coffee, just managing to swallow it instead of spraying it over the table. He glared daggers at Jason, who feigned innocence.
Andrew glanced over at the counter, then back at Jason, and laughed, his eyes crinkling at the edges. Harry bit his lip in frustration. Why couldn’t he get Andrew to laugh like that?
“Yeah,” Andrew said, “He’s not bad to look at.” Then his gaze slid back to Harry and his smile softened. “Not my type, though.”
Author Bio

Annabelle Jacobs lives in the South West of England with three rowdy children, and two cats.
An avid reader of fantasy herself for many years, Annabelle now spends her days writing her own stories. They’re usually either fantasy or paranormal fiction, because she loves building worlds filled with magical creatures, and creating stories full of action and adventure. Her characters may have a tough time of it—fighting enemies and adversity—but they always find love in the end.
Author Links
Twitter – https://twitter.com/AJacobs_fiction
Website – www.annabellejacobs.com
Email – ajacobsfiction@gmail.com
Facebook – https://www.facebook.com/ajacobsfiction
Giveaway
For the chance to win an ebook book copy of Magic & Mistletoe, simply leave a comment below. Giveaway open until midnight EST Saturday Nov 28th.
The giveaway is now closed, the winner is Fuñny Souisa! Thank you all for entering 🙂