Beyond The Scars by Louise Lyons: Blog tour with excerpt and giveaway

I’d like to welcome the lovely Louise Lyons to my blog today to tell us about her new release, Beyond the Scars.
Blurb
After years of physical and mental abuse, Tommy Chadwick finally finds the strength to leave Colin, his tormentor. But Tommy soon finds that escaping his violent boyfriend was only the first step on his path to recovery.
Now he must overcome feelings of worthlessness in order to rebuild his battered self-esteem.
Tommy’s lack of self-confidence prevents him from going out… at first, but then has him ricocheting from one man to another, desperately trying to please them in his search for love and acceptance.
After being rejected on New Year’s Eve, and then beaten after leaving the gay bar, he agrees to accompany his best friend, Sarah, to a martial arts club. There Tommy meets Marcus, a strong older man, who at first becomes his friend, introducing Tommy to new interests, and later, tentatively asks him on a date.
Will Marcus be the man to help Tommy put his past behind him and fall in love for real? 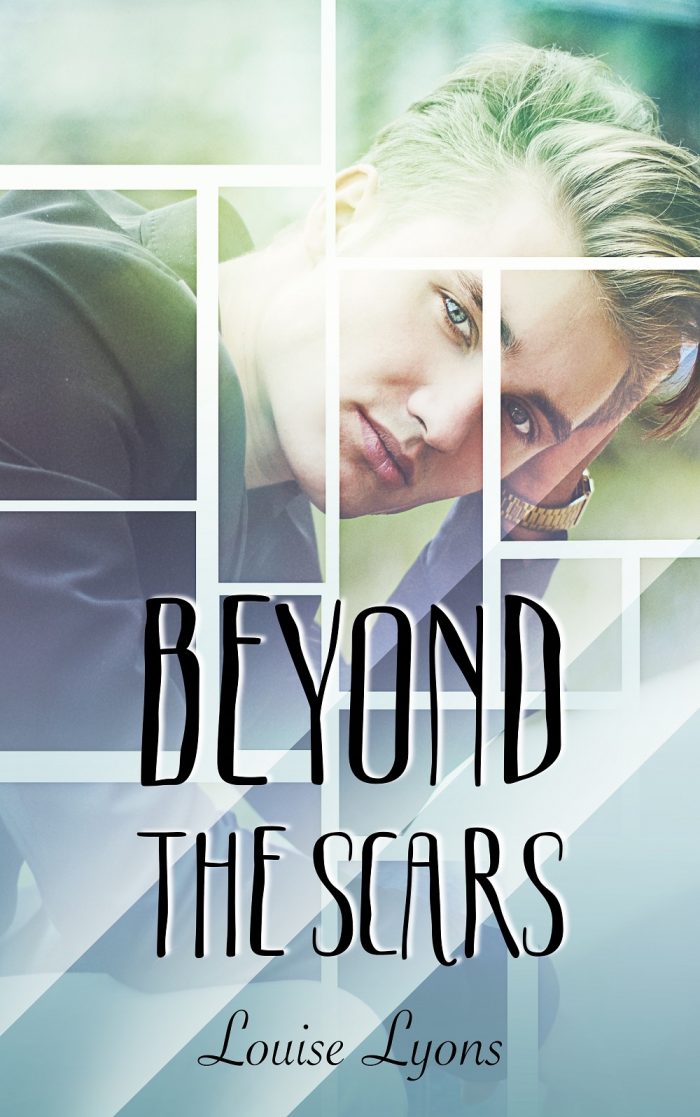 Excerpt
Two years, ten months, nineteen days. That was how long I’d been here. But today was different. Today I was leaving. My life was no longer worth living, and if I didn’t change it, I thought I might die, whether by his hand or my own.
I’d met Colin Woods in June 2004 on MySpace. I’d been nineteen then and reasonably happy in my own skin. But the fishing port of Grimsby wasn’t the best place in the world to try meeting other men. It didn’t have much to offer the GLBT community, and most people either went out of town or used online dating and chatrooms. I’d opened an account on MySpace, and within a few weeks I’d connected with Colin. He lived close to Grimsby, too, in one of the villages not far from the outskirts, and we met just days after our online introduction. He’d seemed so different then.
I jumped and glanced over my shoulder as I heard a sound outside. Our neighbor, slamming his car door. I let out a shaky sigh of relief and continued stuffing my clothes into a bag. My hands trembled, and I tried talking to myself in my head. You’ve got time. He won’t be back for hours. Calm down. Don’t forget anything important.
I fastened the bag and grabbed another smaller one which I took into the bathroom to collect my meager amount of toiletries. Then back to the bedroom for my CDs. Half an hour at the most and I’d be out of here. Free. Safe.
A few more minutes passed. I thought I had everything, but I took another look around to make sure. If I left my wallet or car keys, I’d be fucked. I patted my pockets and found the keys in my right, front, jeans pocket and my wallet in the back pocket on the same side.
I picked up the smaller bag again and shoved in a few odd socks which were on the floor next to the bed. Every moment that passed was a moment too long, and I tried to hurry up. The silence in the flat was so loud my head pounded with it. Then in an instant it was shattered by the front door flying open and crashing against the wall. The bag I was holding fell from my hands, and items scattered across the floor. I took a step back as Colin appeared in the doorway, eyebrows raised.
“I… um… I thought you were g-going fishing,” I stammered.
“I was, but you have to fucking ruin everything as usual,” he growled. “I rang you at work. You know, your place of work where you went two hours ago. Only you didn’t go there, did you? They said you booked time off!” He bellowed out the last sentence, and I flinched. “So tell me, Tommy. Why would you take time off work and not tell me? Why are you here, packing stuff into a bag, ruining my fucking day, when I should be out fishing with my mate?”
“I’m leaving,” I said in a small voice. Maybe he’d let me go. Just maybe he’d be mad enough to think it wasn’t worth it anymore. I’d ruined his day, after all. I could imagine the words coming out of his mouth, and I prayed silently he’d say them. Fuck off, then, Tommy. I’ve had enough. Get out of my sight, and take all your shit with you.
“The hell you are. Get that stuff unpacked right now.” He clenched his fists at his sides, and his jaw twitched. I was impressed he hadn’t hit me yet. “Actually, I changed my mind. Leave that. First you can tell me exactly what you thought you were doing. Haven’t I said a hundred times you’ll never leave me? I won’t fucking let you leave. You have nothing without me, anyway. No one else would want you, useless fucking waste of space that you are.”
“I… I’m sorry. I thought I’d….” I racked my brains desperately for the right words—words which might not result in me being forced to take more time off until the bruises faded. Usually he avoided my face, but if he was really mad he seemed to want to pummel the features he repeatedly told me were a turn off to everyone except him.
“You thought what? I’d let you go, just like that? You thought you’d sneak off like the fucking little coward you are while I’m not here?” He stepped closer, and I gulped, my mouth dry with fear. I knew it was going to be a lot worse than it had been before. I’d never really done anything before to deserve it. Tiny little mistakes—an item put away in the wrong place, his dinner later than he demanded, something not done quickly enough or the way he wanted. Here I was packing, intending to leave and daring to make my own decision. He’d beat the shit out of me.
I took a step back and came up short when I bumped against the wall. Colin lifted his hand, and in a second he had fastened it around my throat.
“You’ll never leave me, Tommy. Do you hear me? I’ll make sure of it.”

Giveaway
Enter Louise’s giveaway here for the chance to win a $10 Amazon voucher and an ebook from Louise’s backlist:
Rafflecopter Giveaway
Author Bio
Louise Lyons comes from a family of writers. Her mother has a number of poems published in poetry anthologies, her aunt wrote poems for the church, and her grandmother sparked her inspiration with tales of fantasy. Louise first ventured into writing short stories at the grand old age of 8, mostly about little girls and ponies. She branched into romance in her teens, and MM romance a few years later, but none of her work saw the light of day until she discovered FanFiction in her late 20s.
Posting stories based on some of her favorite movies, provoked a surprisingly positive response from readers. This gave Louise the confidence to submit some of her work to publishers, and made her take her writing “hobby” more seriously.
Louise lives in the UK, about an hour north of London, with a mad Dobermann, and a collection of tropical fish and tarantulas. She works in the insurance industry by day, and spends every spare minute writing. She is a keen horse-rider, and loves to run long-distance. Some of her best writing inspiration comes to her, when her feet are pounding the open road. She often races into the house afterward, and grabs pen and paper to make notes.
Louise has always been a bit of a tomboy, and one of her other great loves is cars and motorcycles. Her car and bike are her pride and joy, and she loves to exhibit the car at shows, and take off for long days out on the bike, with no one for company but herself.
Social Media
Blog: www.louiselyonsauthor.wordpress.com
Facebook: www.facebook.com/louiselyonsauthor
Twitter: www.twitter.com/louiselyons013
Email: louiselyons013@gmail.com