I’d like to welcome Kate Aaron to my blog today for another instalment of my series on authors who self-publish.

Kate is the author of fifteen titles, all self-published, including three Amazon.com #1 LGBT bestsellers. From slaveworld menage to high fantasy, contemporary to historical, Kate’s turned her hand to most genes, although always focused on two (or more!) men in love.

Why did you decide to self publish?
I grew up looking for LGBT books, reading anything I could find, fiction or non-fiction, from biographies of Alan Turing, Oscar Wilde, and even Alexander the Great, through the works of Renault, Hollinghurst, Leavitt, and Winterson. Studying gender and sexuality at university introduced me to a whole swathe of new authors, but they were all firmly grounded in the establishment, in High Literature, where every action had meaning and a moral attached. The Charioteer is my ultimate desert island book, but sometimes I craved something a bit lighter, something less weighted with Freudian subtext. I wanted to read purely for pleasure. That’s when I turned to Amazon, in late 2010, with my brand new Kindle, convinced there had to be some decent LGBT romances out there. I stumbled onto a book called 50 Reasons to Say Goodbye by Nick Alexander (this in the days before a book starting with “50” was something to avoid), and quickly devoured the whole series. They weren’t perfect books by any means, but they were exactly what I’d always felt was missing: fun, contemporary romances with characters who happened to be gay. But when I looked for more in a similar vein, I was disappointed once again. M/M was in its infancy at the time, and the pickings were sparse (or at least I thought they were, because somehow the phenomenon of fanfiction completely passed me by).
Around the same time, a high school teacher with whom I’d kept in touch was enjoying a considerable amount of success self-publishing romances on Amazon, and it was like a lightbulb came on. I’d always wanted to write, but had shaken the idea off as a pipe-dream. Now I had the desire, the idea, and the means to make it happen, and I began to research self-publishing like crazy.
My first book, Blood & Ash, was published in June 2011, and I’ve never looked back. For me, self-publishing is about creating the stories I want to read, free from the constraints of a press’s demands. I’ve now been writing full-time since July 2013.
What do you like about self-publishing?
I’m sure if you ask most self-pubbers they’ll tell you they’re control freaks who like to micro-manage every aspect of the production process, and I’m no different. These days I’m fortunate enough to be working with a fantastic editor (Theo Fenraven) and graphic designer (Elizabeth Mackey), and they have been invaluable in helping me produce books I’m proud to put my name on. But more than that, I’m the author of my own destiny. If I want to write about a repressed middle-aged man in 1940s England, I can (Puddledown Mysteries), and if I want to write about highly-sexed pleasureslaves torn apart by war, I can do that, too (Free Men). It’s wonderfully liberating not to have to worry if the stories I want to tell will be palatable to someone else’s idea of what the market wants.
Do you have any advice for other authors considering taking the plunge?
Invest, invest, invest. Self-pubbing isn’t a shortcut, or a get-rich-quick scheme. I spend hundreds of dollars producing every book before publication, and there’s no guarantee any of them will ever earn out that investment. Statistically, most self-pubbed books will never earn enough to equal the advance an author can get from even a small press, and that advance looks mighty tempting when you’ve got bills to pay.
Writing full-time is a nerve-racking experience. Yes, self-publishing brings greater freedom, but there’s still the market to consider if an author wants to be more than a hobbyist (which is what I was for two years, and it was wonderful not having to depend on a book doing well and just enjoying every sale for its own sake). I have a number of what I call “backburner projects”: stories I want to tell, but which I doubt will pay the bills. I write them around my other titles and eventually they’ll be published, but not at the expense of more marketable titles. Historicals, for example, are a great love of mine but less commercially viable than contemporaries. These are factors every author who depends on their writing income needs to consider.
For all the cons, however, self-publishing has enabled me to live my dream, as cheesy as that sounds, and I wouldn’t turn away from it now for anything. 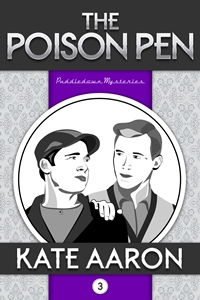 Follow the adventures of Hugo and Tommy as they attempt to unmask the identity of a malicious letter-writer. The first book, The Dead Past, and sequel, The Coward’s Way, are also available.
The Poison Pen
Amazon
ARe
iTunes
B&N
Smashwords

Coming Soon:
Balls Up, the sequel to Blowing It.
Owen Barnes’s life is finally going the way he wants it. He’s making a living as an author, and his relationship with building surveyor Magnus Cassidy is going from strength to strength.
When Owen finds a lump, he buries his head in the sand. He’s too busy for doctor appointments and besides, it’s probably nothing. He pushes concern away and is soon swept up in a whirlwind of distractions. His best friend’s husband is falling apart and Owen needs to be strong for them, not burdening them with his fears.
He says he’ll deal with it when the new book is released, when Ryan and Sameer are more stable, when he’s done writing. Owen has a hundred excuses to hide one simple fact: he’s scared.
Finally, Magnus drags him to the doctor, and the news isn’t good. Will Owen overcome the hand Fate has dealt him, or is his perfect life about to go balls up?
Expected release: June 2015.
About:
Born in Liverpool, Kate Aaron lives in Cheshire, England, with two dogs, a parrot, and a bearded dragon named Elvis.
She holds a BA (Hons) in English Language and Literature, and an MA in Gender, Sexuality, and Culture, and is an outspoken advocate for equal rights. When not hitting the campaign trail or doting slavishly on Elvis, she does what she does best—writes about men in love.
Kate is engaged to award winning author AJ Rose, and together they plan to take over the world.
KateAaron.com