Marketing: survey results and what’s worked for me

Thanks to everyone who took part in my short survey yesterday. The survey is now closed because the free version of Survey Monkey only allows up to 100 responses. The answers were interesting and were mostly what I would have expected, but it was good to have that confirmed. I’m sharing them here in case they’re of interest to others.

The question I asked was:
If you are a reader of my books—i.e. you’ve bought at least one of them—how did you first hear about me/my books?
Here’s the breakdown of the results: 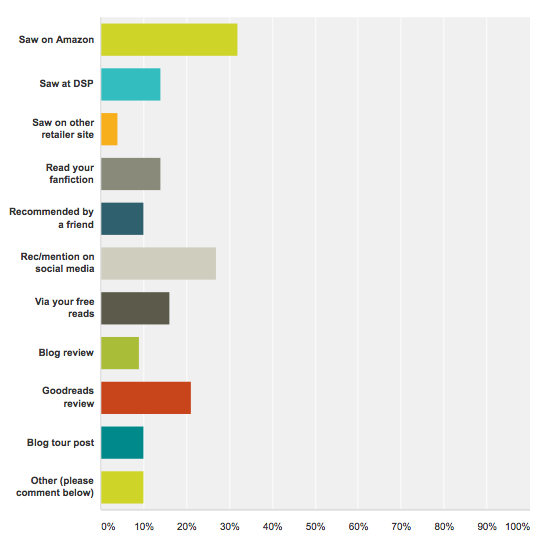 Obviously the survey was biased towards social media as a source, because I reached the readers who answered the survey via social media. If I’d been able to get responses from readers who aren’t connected with me via social media then I think the Amazon and DSP (Dreamspinner Press) bars would be a lot longer.
These results clearly show the power of social media in terms of reaching readers. However I didn’t distinguish between whether readers saw one of my posts, or saw one of my books being shared or mentioned by someone else. From what people said in comments it seems to be a mixture of my own posts being shared/retweeted and things that other people had posted about my books. Word of mouth is incredibly important.
The power of Amazon is also undeniable. Love it or hate it, it’s where the vast majority of books are bought and sold, and being visible on Amazon drives sales. But this isn’t something the author has much control over. If we’re lucky enough to write a book that sells at a certain level, then the Amazon algorithms kick in to promote it. This is where every author wants to see their book appearing:

But without a magic wand there isn’t much we can do to make that happen. On Amazon, success breeds success. But that doesn’t help authors who never reach those magic sales numbers to get Amazon on their side.
So, what can a new author do to reach readers?
I’ve only been publishing for about eighteen months, so would by no means consider myself an expert. But I’ll share my advice here on the things we do have control over in case it’s useful to other authors who are trying to pick their way through the minefield of self-promotion.
Social Media
Find your comfort zone. Social media isn’t for everyone, but having a presence somewhere is important. Personally I mainly use Facebook and Twitter because I’m chatty and enjoy the real-time interaction. I’m not very fond of blogging (although have been making more effort recently) but some authors are brilliant at that. Go with your strengths.
Don’t simply treat social media as a marketing platform to bombard people with your books round the clock. Sure, tweet/post about your new releases a few times a day around release date, because your readers want to know when you have new stuff out. But make sure you’re there for other things too. Social media is all about being sociable. The clue is in the name. Chat, hang out, interact, make new friends and connections. That’s what other users are there for, they want to see the person, not just the book covers and the blurbs.
One of the things that’s worked for me and is a lot of fun, is having a closed group for regular readers and followers of my work. People can request to join or can add their friends. I never add anyone unless they’ve asked, of course. The group gets exclusive giveaways, sneak peeks at new covers and excerpts etc. I enjoy having a slightly more private place to interact with readers (because Facebook pages are hopeless for that) and the people in my group are usually great about helping to get the word out when I have a new release.
Oh, and most importantly – play nice. Have opinions, and don’t be afraid to voice them, but be considerate and respectful. I know they say there’s no such thing as bad publicity but I disagree. We’ve all witnessed authors behaving badly on social media and it’s not pretty. Please don’t be one of those people.
ARC reviews/blog reviews
Getting your book into the hands of reviewers is crucial. Most blog reviewers in the m/m genre also post their reviews on Goodreads—which as you can see from the results above is another major way that readers found me—and many also cross post to Amazon. The review blogs themselves have their own followers, and most of the blogs share the reviews that they post on social media too.
Getting a blog to review a copy of your book is a great way of getting it seen by lots of readers. Yes, it’s scary for new authors to put themselves out there and you have no guarantees that the review will be positive, but it’s always worth the risk. Without exception the review bloggers that I’ve had contact with have been courteous and lovely to deal with. They might not have time to fit your book in, but they never mind being approached by new authors via their contact pages.
Blog Tours and giveaways
There is a lot of debate among authors about whether blog tours are worth doing. Generally, I think blog tour posts often go unread, but if they come with a giveaway people are always interested. Plus giveaways are a great way of reaching new readers. More than one responder mentioned in a comment that they’d won one of my books and then gone on to buy more.
Personally I think blog tours can be useful—if nothing else they give you something new to tweet about. But I’m not a fan of writing blog posts, so I keep them short and sweet. The other option is doing a book blast: just posting cover/blurb/excerpt along with a giveaway around your release day.
If the thought of organising a blog tour is daunting, there are various promo companies that will organise one for you at a very reasonable price. I’ve used Pride Promotions and would definitely recommend them. They also distribute review copies to the blogs they deal with, so it can help you get reviews.
Free Reads
I have two short free reads and they’ve been a great way of reaching new readers. If you do offer free reads, don’t just put them on your blog. You will reach far more readers by putting them on a retail site. People don’t like to have to work too hard to find things, so make it easy for them. You can put free reads on All Romance Ebooks and it’s fairly easy to put them on Smashwords (which will then get them onto Barnes & Noble and Apple too). The Smashwords formatting guide is a little daunting but it’s not as hard as it sounds.
Getting a free read onto Amazon is much more complicated, because technically Amazon don’t allow them. But the way around this is to put it free somewhere else and ask your friends/readers to report the lower price to Amazon. They will usually price match it eventually. I’ve had thousands of downloads on Amazon for my freebies so it was worth the hassle.
Ultimately I believe a successful book is a combination of a good story, an appealing cover and blurb, some half-decent promo and a healthy dose of luck. Luck is the one factor we can’t control, but we can try our best with the others.
I hope some of this has been useful. If you have any advice/questions please comment below. I’d love to hear your views 🙂