I’d like to welcome Joe Cosentino, a fellow Dreamspinner author, to my blog today. He’s here to introduce you to his recent release, An Infatuation. Please check out his reasons for writing, and the details below 🙂

HOW I CAME TO WRITE AN INFATUATION
As a kid I played make believe constantly. “Let’s put on a show!” was my motto. I played all the characters—male and female. Hm, that explains a lot. Thankfully my parents and teachers indulged me rather than committed me.
When I told my mother I wanted to be an actor, she said, “Take this knife and stick it through my heart.” I did it anyway, and acted on stage and screen with stars like Bruce Willis, Rosie O’Donnell, Holland Taylor, Jason Robards, and Nathan Lane. I always enjoyed improvisation as an actor, and I saw writing as an extension of that. So I decided to give playwriting a try. When I told my mother I wanted to write a play, she said, “Don’t you have anything better to do?” I wonder if Shakespeare’s mother said that?  Anyway, An Infatuation began as a one-act play. Hasn’t everyone been infatuated with someone? Think about your first infatuation. There’s nothing more powerful.
I was thinking back to my high school days, and how difficult it was back then for a gay teen before GLSEN, PFLAG, and Will and Grace. Lab partners, gym locker rooms, and club meetings were super important. At my high school reunion, I realized that all the troublemakers had become police officers, and all the homophobes had come out as gay. A story was born.
When the one-act play was a hit, I expanded and morphed it into a novella. While the situation is fictitious, Harold is based on me, and some things I went through in high school. I really admire Harold’s resilience, honesty, intelligence, wit, and ability to keep going in trying situations. His heart may be broken, but his spirit always stays intact. Harold’s devotion to his spouse is admirable, as is his honesty about his teenage infatuation with Mario. Stuart, Harold’s devoted spouse, is very much like my devoted spouse. Mario is a combination of many supposedly straight, perfect guys who gay guys so easily become infatuated with every day. I love that the story spans twenty years so we see Harold (and Mario) develop and mature in their special relationship. I also love that Harold and Mario come full circle at their high school reunion.
I know this story will tickle your funny bone and touch your heart, because it’s all of our stories. We’ve all had an infatuation, and this novel is a testament to that. Please email me via my web site and tell me about your experience with the book. Prop your feet up, and enjoy! 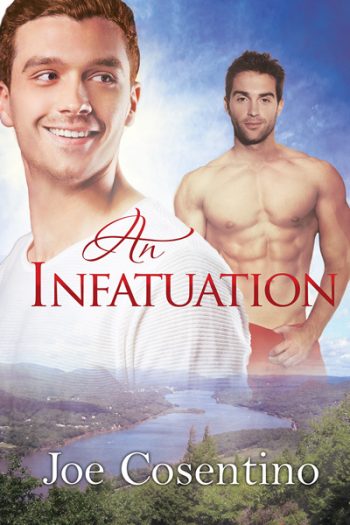 With his ten-year high school reunion approaching, Harold wonders whether Mario will be as muscular, sexy, and tantalizing as he remembers. As a teenager, it was love at first sight for Harold while tutoring football star Mario, until homophobia and bullying drove Mario deep into the closet. Now they’re both married men. Mario, a model, is miserable with his producer wife, while Harold, a teacher, is perfectly content with his businessman husband, Stuart. When the two meet again, will the old flame reignite, setting Harold’s comfortable life ablaze? How can Harold be happy with Stuart when he is still infatuated with his Adonis, his first love, Mario? Harold faces this seemingly impossible situation with inimitable wit, tenderness, and humor as he attempts to reconcile the past and the future.
A Bittersweet Dreams novella from Dreamspinner Press
e-book $4.99
purchase links:
http://www.dreamspinnerpress.com/store/product_info.php?products_id=6009
http://www.amazon.com/Infatuation-Joe-Cosentino-ebook/dp/B00SZ9618S
Excerpt:
One Friday afternoon I accidentally ran into my hero in the boy’s locker room. I’d had enough of the big guys banging me into gym lockers, pushing me into cold showers, and hanging me from the gym ropes. So I was on my way to give Mr. Adoni a note from Dr. Dlorah excusing me from gym class for the remainder of the school year (due to my highly contagious disease being studied by my doctor in Guatemala, where he could not be reached for the next year).
The locker room smelled of an odd combination of soap, cologne, sweat, and desire. Mario was getting ready for football practice, standing at his gym locker without a combination lock on it. Nobody would dare to break into it (Except for me that one time I smelled his jock strap. Okay maybe it was a few times, but not more than ten.). Mario slid his T-shirt (red today) over his thick, black hair and threw it on the nearby bench. No longer harnessed by cotton, his arm, back, chest, and neck muscles swelled to full size. I was half hidden behind the adjoining row of lockers, wearing my usual green and blue flannel shirt and brown corduroy pants. Mario, who wasn’t looking in my direction, said something really beautiful to me that I will never forget. “Hi.”
“Did you just? Oh. Hi. Hello. Good afternoon. Nice to see you. I mean, change with you.” I looked down at the floor (but cheated a bit) as Mario kicked off his boots, slipped off his jeans then threw them in the lucky locker. His red underpants (briefs) revealed ample manhood. This is better than the newspaper’s underwear ads!
“Good gym class today with Mr. Adonis, I mean, Mr. Adoni.” Did I just say that? “Harold High.”
“Hi.”
“High.” How can I get my pulse down to 260?
“Hi.” Mario reached into his locker for his sweat clothes.
Shouldn’t people be doing that for you? “Oh, my last name is High. Like a kite.” How can I stop my arms from waving like an airport flagger on speed?
“Mario Ginetti. Like nothin’ else imaginable.” Mario smiled, revealing a row of perfectly white teeth, and held the sweat clothes in his hands as if he was mortal.
“I know. I watch your body play.” Why can’t I stop talking? “I mean, I watch you play … football … on the field … in your football outfit.” I feel like Michelangelo with his David!
As Mario put on his sweats, I continued to sweat.
“I’m voting for your body … I mean I’m voting for you for president of your … our … the student body.” I need my jaw wired shut. “I’m your lab partner in Chemistry class. Ms. Hungry’s class … I mean Ms. Hunsley’s class.”
His olive-colored face glistened as Mario’s face registered recognition—of me! “I thought I knew you from somewheres. Hey, thanks for doing the lab reports.”
“It’s my honor … I mean my pleasure. It’s fine. If you need help putting up posters for your campaign, I can … ”
Having just tied the laces of his sneakers, Mario stood absolutely still. He looked at me as if he was staring into my heart and somehow knew what I was feeling. “I gotta take a wicked piss.”
Can I watch?
“Thanks for helping me out, Buddy.” He slammed the locker door and left.
He called me, Buddy! My heart was as soft and silly as putty that Mario held in the palm of his hand like his soap on a rope.
Author Bio
Joe Cosentino is the author of An Infatuation (Dreamspinner Press), Paper Doll, the first Jana Lane mystery (Whiskey Creek Press), Drama Queen, the first Nicky and Noah mystery (Lethe Press-releasing this summer), and The Nutcracker and the Mouse King (Eldridge Plays and Musicals). He has appeared in principal acting roles in film, television, and theatre, opposite stars such as Bruce Willis, Rosie O’Donnell, Nathan Lane, Holland Taylor, and Jason Robards. His one-act plays, Infatuation and Neighbor, were performed in New York City. He wrote The Perils of Pauline educational film (Prentice Hall Publishers). Joe is currently Head of the Department/Professor at a college in upstate New York, and is happily married. His upcoming novels are Porcelain Doll (the second Jana Lane mystery), Drama Muscle (the second Nicky and Noah mystery), A Shooting Star (Dreamspinner Press novella), A Home for the Holidays (Dreamspinner Press holiday novella).
Web site: http://www.JoeCosentino.weebly.com
Facebook: http://www.facebook.com/JoeCosentinoauthor
Twitter: https://twitter.com/JoeCosen
Goodreads: https://www.goodreads.com/author/show/4071647.Joe_Cosentino
Amazon: http://www.amazon.com/-/e/B00KRPXJP6