I’d like to welcome the wonderful Renae Kaye to my blog today to introduce us to her 5th novel, Shawn’s Law. 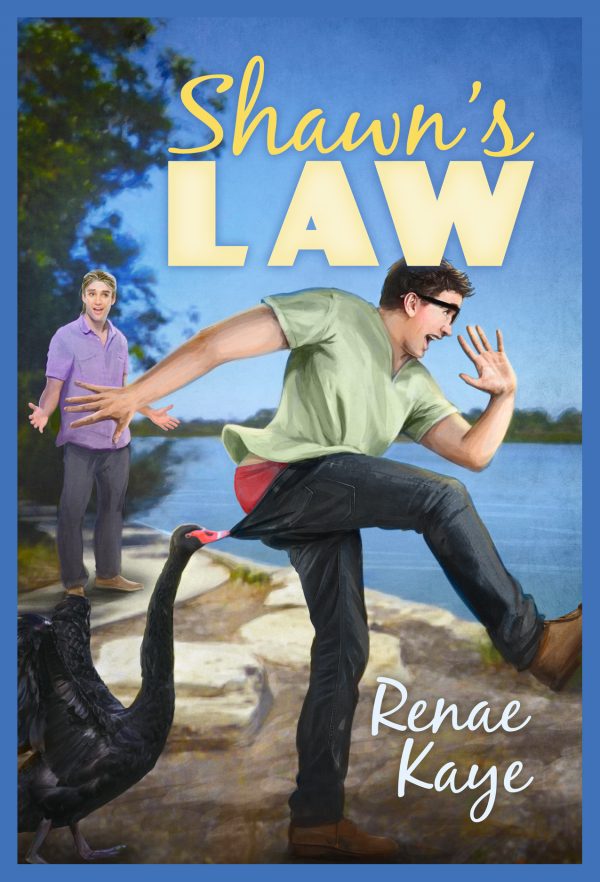 Shawn is single, twenty-nine, the full-time carer of his Alzheimer’s-stricken mother and a frequent victim of Murphy’s Law—although his family call it Shawn’s Law.  Other than caring for mum, his day consists of painting nude men and spying on the guy who walks his dogs along the street every day at four o’clock. When he takes a spectacular fall on his front steps, who is there to witness it other than the man of his dreams?
Harley doesn’t believe in Shawn’s Law – but he soon changes his mind.
The two men make it through a memorable first date and Shawn’s sexual insecurities to begin a relationship stumbling toward love.  But when Shawn’s Law causes Harley to be injured, Shawn is determined to save Harley’s life the only way he knows how—by breaking up with him.  Not once, but twice.  Throw in a serial killer ex-boyfriend, several deadly Australian animals, two dogs called Bennie, a mother who forgets to wear clothes, an unforgiving Town Council, and a strawberry-flavored condom dolly, and Shawn’s Law is one for the books.
Why did you write Shawn’s Law?
I love writing. I love writing because it’s something I can do around the other things in life. Namely my two small children, a husband (who takes up more time than the kids – I swear it!), a house, garden, pets and family. Writing doesn’t care if you turn up thirty minutes late because you wanted to attend the school assembly, or that you unexpectedly took three days off because your kids had gastro. Writing just lovingly waits for you.
I also adore entertaining an audience. I did some acting in my school years and was always cast as the mentally insane character. (**sigh** Did they know something I didn’t?) It was a barrel of laughter and I loved it. Being able to make people laugh at (with) me with a simple gesture or a look is a wonderful experience. Because for those 90 minutes you’re on stage, people are not worrying about their mortgage, or the boss at work who has it in for everyone, or even what their mother is going to think of their new tattoo. For those minutes, while they’re on the verge of pissing their pants in their seat, they are about happiness. And in this world of on-line trolling, diseases, war and yet another celebrity acting stupidly, we all need to laugh.
These days my audience is usually composed of children as I act out the story I’m reading and put on voices. (My apologies to the authors who wrote those books for the extra bits I always put in).
And Shawn’s Law is an extension of my wanting to entertain with a story. If anyone has read Safe In His Arms and is looking for the same dark, emotional journey, then you’ll have to wait for the next book. This book is all about comedy and stupidity.
I know (**sigh**) some people are going to be disappointed, and some people are going hate it, but that’s okay. Because I loved writing this story, and I loved Shawn and Harley’s journey. Life is too long for it always to be serious and angsty.
However Shawn’s Law does have some serious messages for us. How many times have we ever seen someone with a problem continuously dwell on that issue until it becomes so big it is too overwhelming for them? Shawn is not like that. He picks himself up, and moves on. His mother has Alzheimer’s and he is her primary carer. While researching this book I looked at many websites, and all of them had pictures of old people looking sad. Life is what you make of it. In the first scene of this book, Shawn’s mother sneaks outside and runs through the sprinklers naked while Shawn is preoccupied doing something else. Life is what you make of it. Instead of being angry or sad or embarrassed, Shawn shrugs and says that now he doesn’t need to make her have a shower. Life is what you make of it.
The other message, which I hope the reader can take away with them, is that we need to love who we love, without trying to change them. Not every person in this world is beautiful and gorgeous. Not every person is calm, composed and collected.   People come into our lives who are not perfect, and who have a lot of baggage. We need to love them with open hearts and open minds. We need to understand we cannot always come first in their lives. We need to grasp love now, while we see it, and not think that a better offer will come along.
So now that I have sermonised a bit on you all, how about some Renae-facts regarding the Australian wildlife that appear in this story:

So now that I’ve scared the pants off you, here are the links to buy:
Dreamspinner: http://www.dreamspinnerpress.com/store/product_info.php?products_id=6126
Amazon: http://www.amazon.com/Shawns-Law-Renae-Kaye-ebook/dp/B00TXN1BZI
ARe: https://www.allromanceebooks.com/product-shawn039slaw-1751897-149.html
Barnes and Noble: http://www.barnesandnoble.com/w/shawns-law-renae-kaye/1121263042?ean=2940151483926
How to contact Renae:
Email:  renaekaye@iinet.net.au
Website:  www.renaekaye.weebly.com
FB:  www.facebook.com/renae.kaye.9
Twitter:  @renaekkaye