For those who haven’t already seen my many photos and posts on Facebook… I DID IT!
Here’s my account of the experience along with some photos. The 10km race that I did involved doing two laps of the same course, so I had the dubious pleasure of doing all the obstacles twice. Lucky me 😀 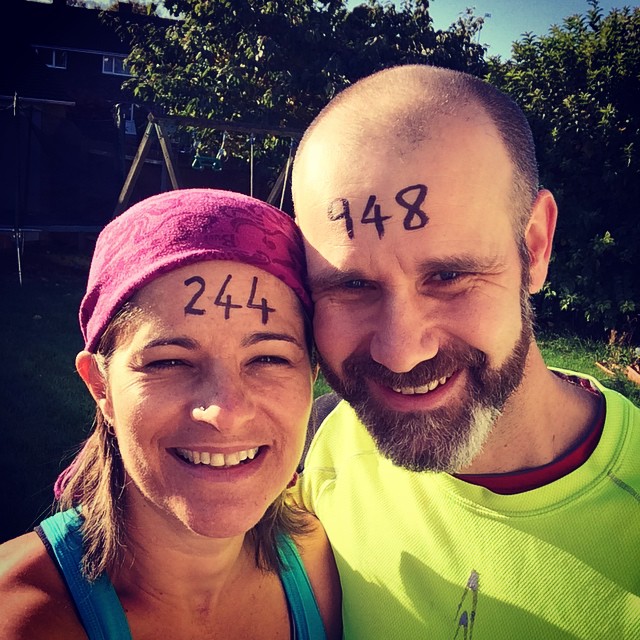 Here’s me and hubs looking clean before we even left home. The number on the forehead is because numbers on shirts would get too muddy/ripped on the course–that’s the first clue that it was going to be pretty hardcore.
It started off pretty tamely, with a nice trot across a grassy field and a few hay bales to scramble over. We decided that was too easy, so we did Starsky and Hutch rolls over them instead (sadly I have no photos of this but I’m sure we looked awesome and not silly at all.)
But after the first couple of kilometres, things took a turn for the cold and wet when the trail led us into a stream. It was only ankle deep at first but it was bloody cold. My feet turned numb pretty fast. Then the stream started to get muddier and deeper. 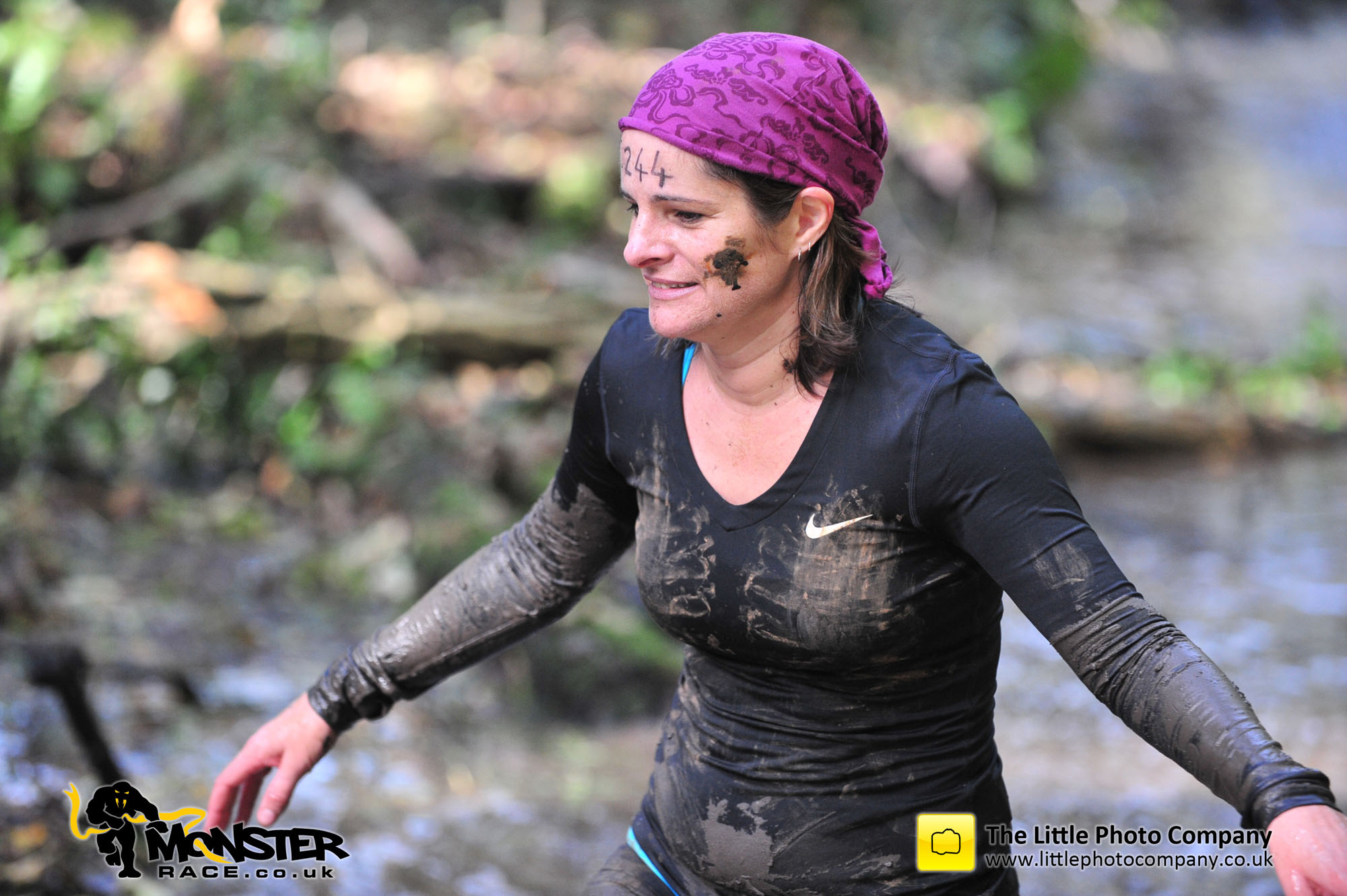 The screams of horror from up ahead should have been a warning that something bad was coming… because round the next bend it was suddenly more of a swamp than a stream. It got deeper, and muddier, and stickier, and smellier. At one point we were wading through gluey mud up to mid thigh, I nearly lost a trainer and was very glad I’d laced them tight.
My first moment of actual pure panic was when I saw the strips of barbed wire crossing the swamp. The only way through was to crawl on hands and knees under it. I don’t have a photo of me doing it, but this is how it was: 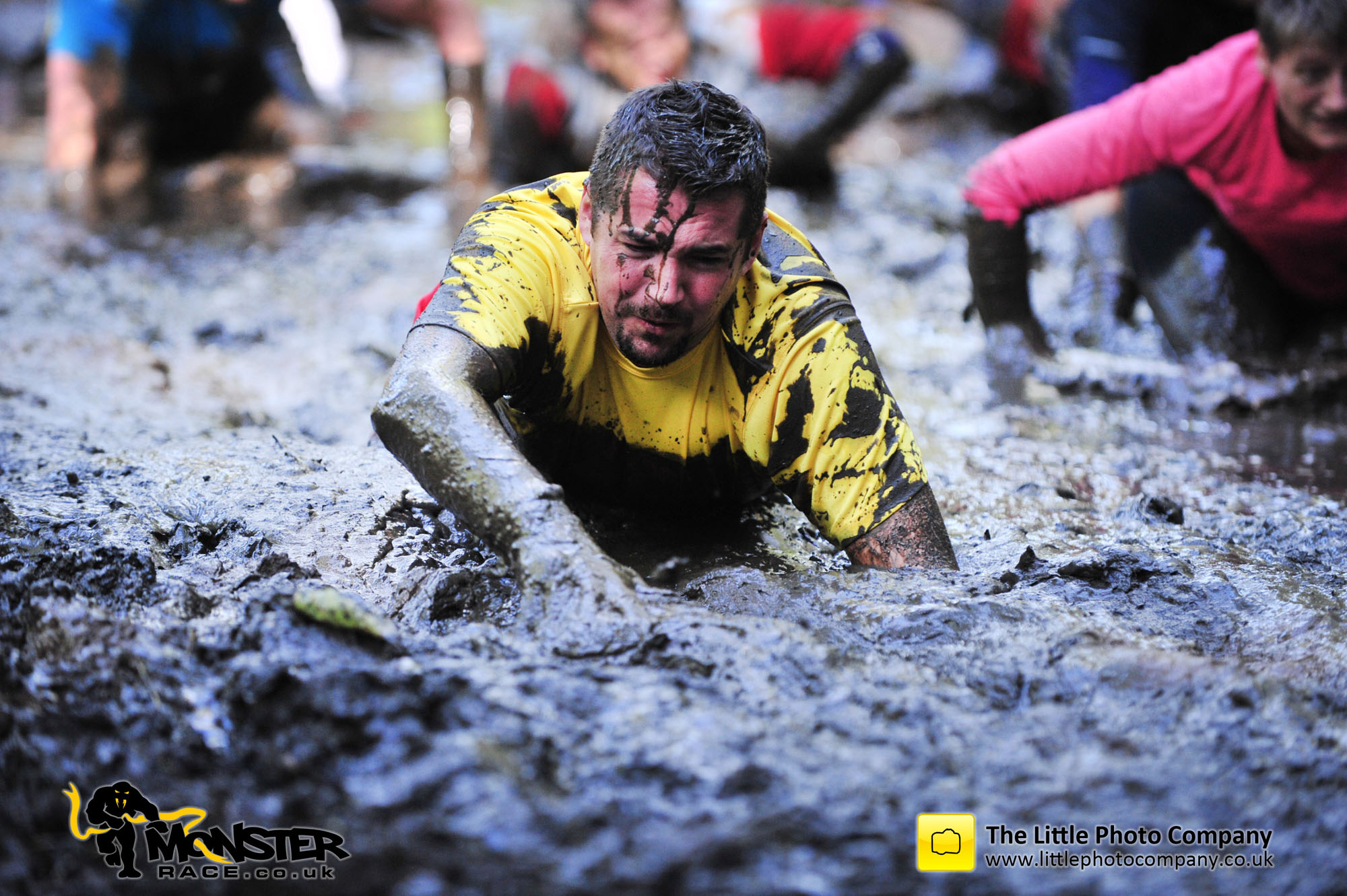 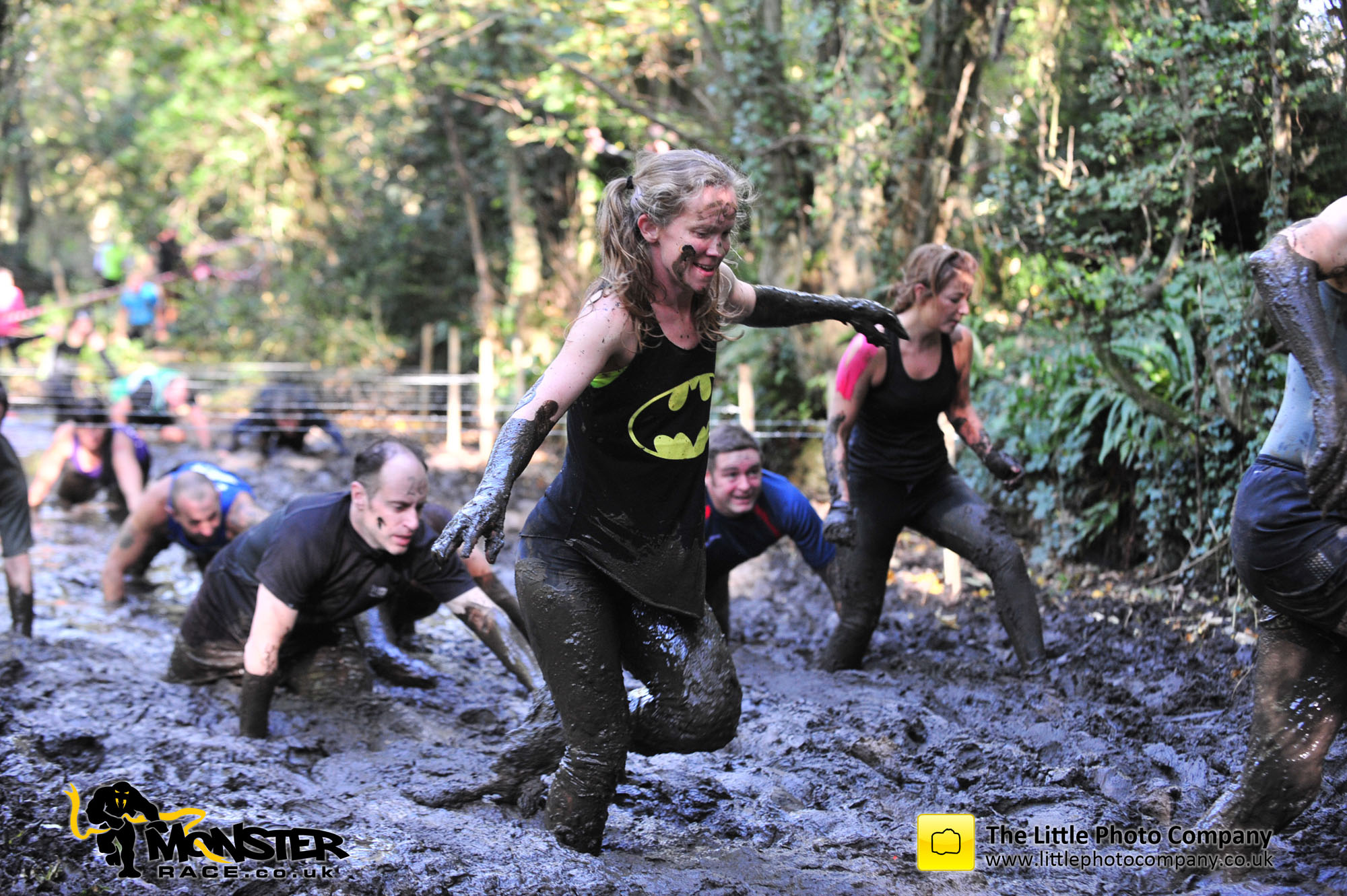 Now, given that I’m the sort of person who will sidestep mud even when I’m wearing wellies you can imagine how much I enjoyed this experience. My biggest fear was getting mud splashed into my mouth by the person in front, so I kept my mouth shut and screamed through my nose (try it–it’s sort of possible).
When we came through that, my hands and arms were caked up the elbows. Of course, I immediately got an itchy nose, so had to stop and scratch my nose on a tree because there was no way those hands were going anywhere near my face.
The next stretch was another stream, a little muddy–but less muddy than me so at least I got to rinse my hands.
After that, there was more running on grassy/muddy tracks, and various climbing/crawling obstacles. They weren’t hard to climb over for the most part, but slippery, muddy hands made it more difficult than it should have been. The camaraderie on the course was awesome though, everyone was having such a blast, and there was always someone to give you a leg up or a hand up if you needed it. 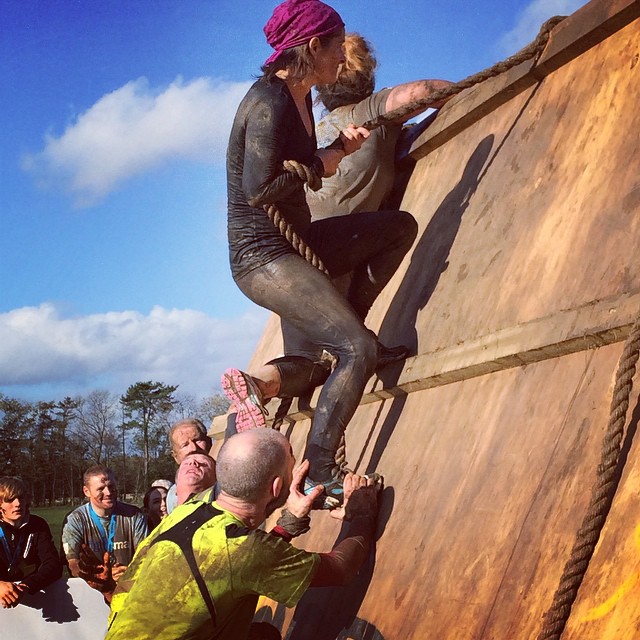 The other really challenging part for me was the lake that came near the end of the course. After slithering down the mud into the water, I realised that I was going to be virtually out of my depth in the middle. At 5’3” height isn’t on my side.

There was a diver ready to rescue people if needed, but there were a lot of nervous people for him to keep an eye on. I tried to swim–I’m normally a strong swimmer–but my trainers were weighed down with mud and water and I was struggling. The combination of panic and breathlessness from the cold made that pretty alarming. Luckily hubs was able to touch the bottom and wade, so he towed me till I was back in my depth again. On my second lap I managed to stay calmer and did actually swim the middle part of the lake. I was very glad to touch the bottom on the other side!
The last part of the course was tame compared to what I’d already been through. There was a water slide which was awesome.

And then just a few more obstacles to go: crawling/rolling through mud under tyres, lifting weights on pulleys and some more things to scramble over. The final section that you only did after the end of your final lap sent us through the ‘meatgrinder’–two platforms of tyres that you had to crawl/wriggle/lurch through.

By that stage I was so exhausted that I seriously wondered whether I was ever going to make it through. I got stuck in the middle for a while! Then we just had the final A frame to climb over before staggering over the finish line. 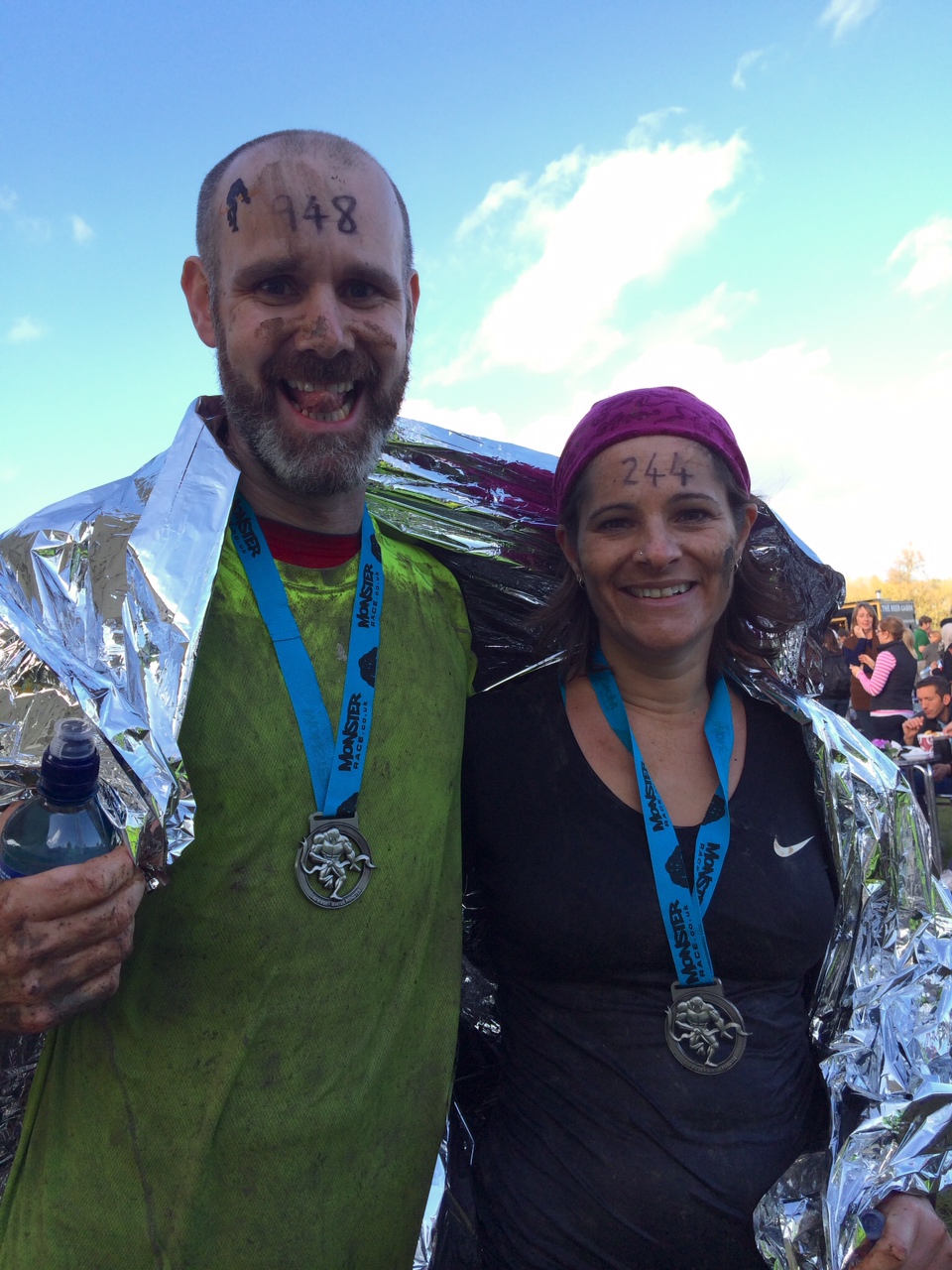 It was an amazing experience and I’m really glad I did it. Physically it was one of the toughest things I’ve ever done. Typing this twenty-four hours later, I’m still aching all over. And at the end of it, I’ve never been more desperate for a hot shower.
But one of the things that kept me going through the course (and with the training I did beforehand), was knowing that I was doing it to raise money for the Albert Kennedy Trust–a charity who support homeless LGBTQ youth in the UK. Putting up with a little hardship to fundraise for an amazing cause was well worth it. I’m really thrilled to have already raised over £220 for them at the time of writing this post. Thank you so much to those of you who have already sponsored me. If you haven’t and would like to, it’s not too late. The page is still taking donations for the rest of 2014. You can sponsor me here: www.justgiving.com/jaynorthcote
So, I did my research for Nothing Ventured approximately six months too late, but hey. Better late than never! I’m currently considering entering the Tough Mudder next summer, so watch this space….
A huge thank you to The Little Photo Company who took the official (and amazing) photos on the day, and who allow participants to download and use them free of charge.