My next book, Nothing Special, is due out on August 13th. It’s not long to wait now, so here’s all the inside info on the story. If you have any questions, feel free to ask me in a comment here, or ask on Twitter/Facebook if you follow me there. I’ve also set up ‘ask the author’ on my Goodreads profile. 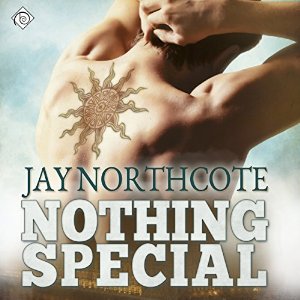 Noah thinks he’s nothing special. Average height, a bit on the skinny side, and cute but rather geeky, he’s relentlessly ordinary. He certainly doesn’t expect to be noticed by Sol, the gorgeous dark-haired stranger Noah sees on his commute home most days. But when Noah’s friend, Dom, persuades Noah to take a huge risk in a bid to get Sol’s attention, things turn out better than Noah dared to hope. Noah and Sol start dating, and much to Noah’s surprise, his feelings seem to be reciprocated.
But Noah’s insecurities make him doubt Sol. He doesn’t believe he’s interesting enough or sexy enough to hold Sol’s attention, and as Sol tries to get closer, Noah’s instinct is to pull away to protect himself. If their relationship is going to survive, Sol needs to convince Noah that he sees Noah very differently to how Noah sees himself. Because to Sol, Noah is something very special indeed.
Now ready for pre-order at Dreamspinner Press
Add it on Goodreads
So, the time is nearly upon me. My next book is soon to be released! Nothing Special is due out on August 13th and I’m starting to field similar questions from a few people on Twitter and Facebook, so I thought I’d post my answers here.
Is it a sequel to Nothing Serious?
Nope. Nothing Special is completely unrelated. The characters, Noah and Sol, are brand new, and the story is set in London rather than the fictitious market town where Nothing Serious was set.
Why did you decide to use such similar titles?
It was never my intention to link them when I first started writing this book. But when I finished writing Nothing Special and was trying to think of titles, that title kept popping into my head, and it was so perfect for the story I decided I needed to run with it.
Then I realised that although the books are unrelated stories, they are similar types of book. Both of them are longish novellas, both are sweet, easy, mostly feelgood reads. I figured that they will appeal to the same type of reader, so there is no harm in them being associated together as long as the blurb makes it clear that Nothing Special isn’t a sequel (and I hope it does).
Is that why the covers are linked too?
Yes, once my publisher and I decided to go with that connection it made sense to have the same cover artist for Nothing Special. I wanted the same type of look, to link the books as a set. Anna Sikorska has done a beautiful job with both of them.
Are there any other ‘Nothing’ books in the pipeline?
There’s one more that’s written and contracted. Nothing Ventured is due out with Dreamspinner Press in November 2014. You’ll be able to read more about that soon, so watch this space 🙂