New contract news and Not Quite Shakespeare

I woke up to a new contract in my inbox this morning–hurrah!

Nothing Ventured has been picked up by Dreamspinner Press and will be out sometime in November. It’s another long novella and will be the third in the set–although they’re not a series–of novellas with ‘nothing’ in the title.
Nothing Special is the next one to be released, that’s due out mid-August. Despite the similarities in the titles, Nothing Special and Nothing Ventured aren’t sequels to Nothing Serious (sorry to those of you who I know are hoping for one). They are a similar type of story though, in that they’re light, mostly feelgood, sweet and sexy. This is why I decided to stick with the theme of ‘nothing’ titles for this set of easy reading novellas. I hope that people who enjoyed Nothing Serious will like these next two titles from me as well.

The final bit of news from me in this update is that I have a short story due out very soon in the Dreamspinner anthology Not Quite Shakespeare. This is an anthology of stories that celebrate all things British. You can pre-order it on the Dreamspinner site now (for 20% off at the time of writing this blog post!) and it will be out and available in all the usual places on Monday 2nd June.

My story in the anthology is called Tops Down, Bottoms Up.
This is the blurb for my story:
Rowan is stuck at a folk festival for the weekend and it’s really not his scene. Early morning meditation, yoga, and singing workshops are bad enough, and when he hears there are morris dancers too, it’s the last straw. But all Rowan’s preconceptions about morris dancers are shattered when he meets Seth, who looks like all Rowan’s fantasies rolled into one. Rowan decides he’ll do just about anything—even attend a morris dancing workshop—if it means he can get closer to Seth.
And here’s a little extract to whet your appetite:

The figures were mostly straightforward and some were reminiscent of things Rowan had learned in country dancing at primary school. He enjoyed the warm grip of Seth’s hand when they did a ‘hands around’—which involved clasping hands as you did a full turn with your partner. But the thrill of the physical contact made Rowan forget what his feet were doing. When he stumbled and nearly tripped, Seth caught him with a strong arm around his waist that fucked up Rowan’s concentration even more.

After that, everything went smoothly until they got to learn two figures called ‘tops down’ and ‘bottoms up’.

“That’s how you name the couples in a morris set.” Seth replied, utterly deadpan. “Top couple, middle couple and bottom couple. So we’re the bottoms.” A quirk of his lips betrayed him.

Rowan couldn’t resist “Both of us?” He raised his eyebrows. “Could be awkward.”

“Pay attention. That’s our cue.” Seth grabbed Rowan’s arm and guided him as they danced up the middle set for a few steps, and then back to where they’d started. “See? Bottoms up.”

When they got back to their place, Seth leaned in close so only Rowan could hear him. “I’m actually more of a top.” His words sent a jolt of heat through Rowan that left his heart pounding as Seth pulled away.

Rowan stared into Seth’s eyes and saw a clear invitation there this time. Oh yeah, he thought. Game on. He licked his lips deliberately and watched as Seth caught the movement. “I was hoping you might be.” 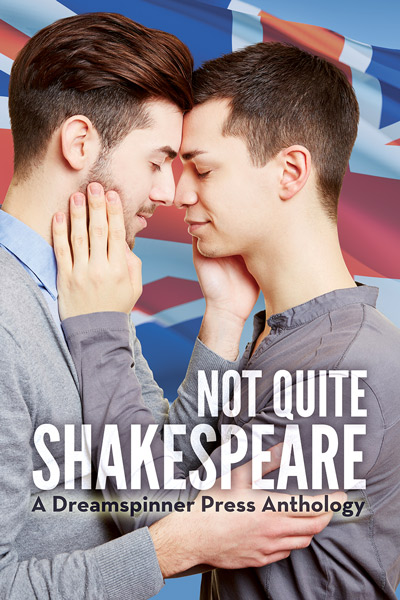 Take a ride to Northern Scotland on the famous train, the Jacobite, and rediscover desire. Get lost in the Peace Maze in Northern Ireland during a downpour and let a handsome young redhead come to the rescue. Take a tour of historical Blackpool on the English coast and set the stage for the perfect romance. From England to the outer isles, the UK holds treasure troves of romance, history, intrigue, and—naturally—quirky British humor. Not Quite Shakespeare samples it all in fifteen stories.
A man in London makes an accidental confession of sexual need to a virtual stranger who happens to be his boss. An American revisits West Sussex and rekindles an old flame with a romp in the stables. A couple finds their perfect third while vacationing on a pig farm in Yorkshire. In the office, on the race track, or in the kitchen baking bread—romance in the UK is alive and well, and full of sweet surprise.
Pre-order from Dreamspinner Press