25% off to pre-order Not Just Friends, and a teaser

Not Just Friends is out a week tomorrow!
I’m getting excited/impatient/jittery now, but luckily I have a ridiculously busy week ahead of me so I won’t have time to let the pre-release nerves build up too much. It’s school half term here in the UK and we’re away in Cornwall for part of the week and busy with visitors for the rest of it 🙂
Now is a great time to pre-order Not Just Friends, because it’s 25% off at Dreamspinners until the 19th of Feb in their Valentine’s Sale. This offer applies to all books in the Dreamspinner store.
Here’s a little excerpt as a teaser:
*** 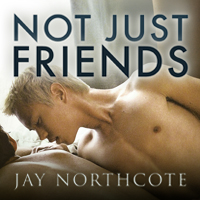 “Aww, Lew.” Max let his head drop onto Lewis’s shoulder. “You’re so sweet. Why are all the nice boys straight?” He sighed, then suddenly snorted. “Well. Okay, maybe not all, because look at Dean. And my ex–best friend at college turned out to be a tosser, and he was straight—well, mostly straight. But you’re lovely.”
“Lovely?” Lewis made a joke of it, trying to ignore the way his heart fluttered at Max’s words, and at the weight of his head on Lewis’s shoulder.
“You are.” Max was serious now, lifting his head again and sitting up, angling his body so he could look at Lewis. Lewis’s cheeks burned, and he had to look down at his hands, away from the intensity of Max’s gaze. “You’re a really good person, and really kind. And I’m so glad I’ve met you. I’m glad we’re mates.”
Lewis tried to make light of it again, his lips quirking as he took the bottle out of Max’s hand. “It’s just the wine talking. You’ll be telling me I’m your best mate ever in a minute, but don’t worry. At this rate, neither of us will remember it in the morning.” He gulped in a mouthful of wine, his hand shaking as he tilted it. “Bollocks.” He swallowed, looking down at the dark splash on his T-shirt. Then he lifted his head and looked at Max again. Max’s gaze was fixed on his lips, his green eyes dark and intent.
“You missed a bit.” Max lifted his hand, slowly but deliberately, as though he was afraid Lewis was going to flinch away. “Let me get it.”
Lewis stared back at him. His muscles were taut with anticipation, heart pounding as though he’d run up the five flights of steps to their flat. Max’s thumb was warm and soft as it brushed a stray drop of wine, first from Lewis’s chin and then from the corner of his mouth. Lewis let his lips fall open at the gentle touch, a puff of breath escaping that he couldn’t hold in. Max kept his hand there, his fingertips just grazing the slight stubble on Lewis’s jaw as his thumb slowly traced the shape of Lewis’s lips, and Lewis was afraid to breathe. He was afraid if he moved, or said or did anything, the spell would be broken and the moment would end.
***
If you’d like to win a paperback copy of Not Just Friends, I’m currently running a giveaway on Goodreads.