Nothing Serious: it’s all systems go

This week has been crazy!
I’m halfway through my 2nd round of edits of Nothing Serious, and have also been busy with the lovely people at Dreamspinner Press finalising the blurb and the cover design.
All of this has been happening amid not one, but two trips to London (the 2nd unplanned) to try and see Colin Morgan (best known for his role as Merlin in the BBC series) perform in the The Tempest. I had tickets for Sunday but he was sick and didn’t perform (woe was me), then luckily I managed to get back to London on Wednesday and saw him perform last night. He was amazing so it was totally worth all the stress.
Anyway, I digress. Here is the cover for Nothing Serious, designed by Anna Sikorska. 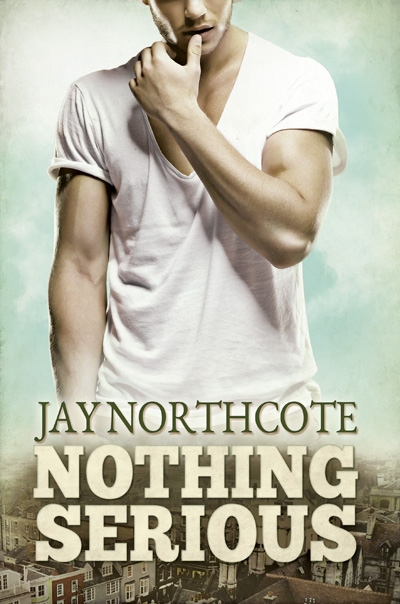 Isn’t it beautiful? The guy on the front really is perfect for the character he represents (Jamie). And here’s the blurb:
Mark O’Brien is finally being honest with himself. His relationship with Rachel is over and he’s moving out of the home they’ve shared for six years. They get along, but he can’t fix a relationship when the person he’s with is the wrong gender.
Jamie Robertson, one of the removal men, is huge and ridiculously gorgeous, and Mark is smitten at first sight. When a cardboard box splits, revealing items of a personal nature that Mark never wanted anybody to see, he’s mortified. But it sparks the start of a beautiful friendship with benefits.
As Jamie initiates Mark into the joys of gay sex, the two men get increasingly close and “nothing serious” turns into something rather important to both of them. But communication isn’t their strong point. Will either man ever find the courage to be honest about his feelings?
Nothing Serious is scheduled for release on October 23, 2013.